On the way back from our recent vacation, in the lineup to get on our plane, I stood behind what appeared to be the HAPPIEST FAMILY in the whole airport. They cheerfully switched their boarding passes with each other to rearrange their seating. They each eagerly shared the highlights of their trip with one another. They were chipper and fresh faced – at the END of their trip. Then, I kid you not, the three children spontaneously BURST INTO SONG.

So the perkiest family EVER in the airport got me thinking about our own vacation and how things played out.

This is us at the beach. 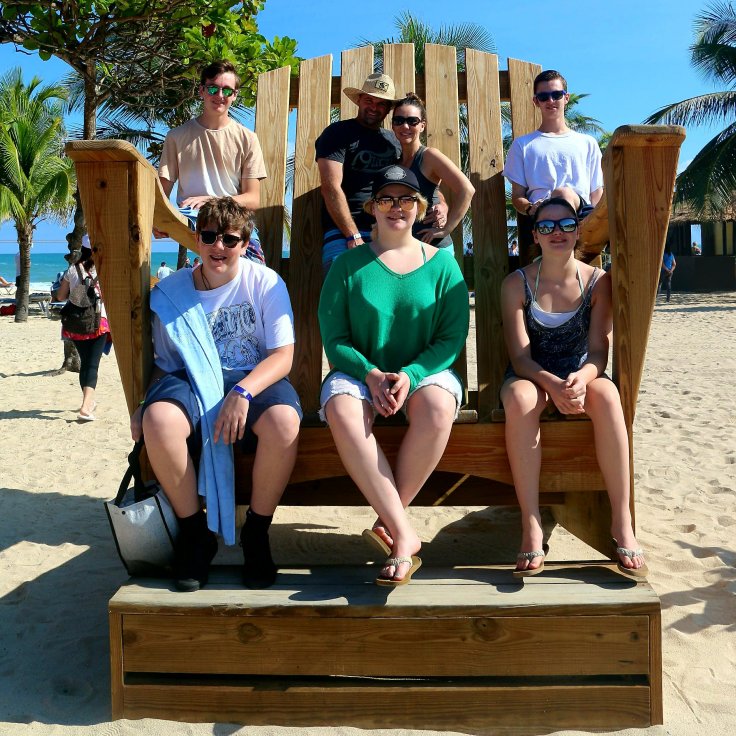 Aren’t we all smiley? There are five teenagers in this picture. FIVE. That’s a whole lotta hormones and feels all at once. But it’s rare that we talk about all of THOSE things.

There were pre-trip blowups. Packing crises, stress induced fights, 7 full sized humans and their luggage crammed into one vehicle to the airport. There are no 99 bottles of ANYTHING on our family car rides. The licence plate game doesn’t exist. Here’s what does happen:

“OWW! Stop it!”
“No, I called captains seat!!!”
“Fine! Rock paper scissors for the seat!”
*glares* from the rock-paper-scissors-seat-loser

That time I felt like a stuffed sausage in my dress and had an actual meltdown in the room 15 minutes before dinner.

***Note to self: In all-you-can-eat situations, stretchy dresses are your friends.

The massive pushback from said $5 rule – mostly from the repeat offenders.

My complete lack of follow through with the $5 rule. It wasn’t enforced even once. I’m pretty sure that breaks at least one rule in every parenting book ever written. Follow through is key. I had ZERO.

***Note to self: don’t make new rules while on vacation – especially when you’re fed up. It’ll hurt you more than it’ll hurt them.

“BE FREAKING KIND TO ONE ANOTHER!!!”

At least one different kid each meal spent most of the time looking down, rolling eyes, scowling, or just being incredibly bored. On an extra special morning, one of the kids sat with plugged ears for 15 minutes straight. Because I-might-have-to-sit-here-but-I’m-not-gonna-listen. It takes dedication to poke your own fingers into your head and hold them there for 15 whole minutes; I’ll give said kid credit for that.

At the end of it all, I was tired. So when faced with the happy shiny singy folk in front of me, I became jealous. I was in awe. And I got discouraged.

And then I remembered something.

We’re a blended family with 5 kids between the ages of 14 and 17. We’re separated – for the THIRD TIME. “Complicated” is effortless for us. It’s been our default state for awhile. We are cuts and bruises and open wounds still healing. These kids never asked for their families to be ripped apart. This patchwork group wasn’t their first life pick. Five teenagers, each with a lifetime of joy, of pain, of grief and loss.

None of us wants to hurt each other. We’re all trying our best to make it.

So, when I walked onto the plane and saw OUR kids sitting together smiling – not singing, not sharing trip details, but simply treating each other with DIGNITY – my heart turned mushy. And then, more came to me.

There was that one time everyone was happy for THE WHOLE MEAL. One amazing meal. That’s better than no amazing meals.

That time the kids got wide-eyed, smiled the BIGGEST smiles, and agreed “this is AWESOME!”

Those times the kids WERE kind and considerate towards one another. And the fact that they’re actually all great, smart, and thoughtful kids. We have five kids who mostly like each other. I have stepkids who treat me with respect and love, who actually want me around more often than not. That’s HUGE.

That time one kid earnestly and sincerely attempted to teach me about the Fibonacci Sequence. I love quality time and also I hate math. It was a conflicting experience.

That time my husband and I argued in a MUTUALLY respectful way.

Sometimes, success looks different in every journey. Maybe we didn’t spontaniously burst into song. Maybe we weren’t always chipper and excited. Our circumstances didn’t actually change. We’re still separated. Our family engine is still broken. But maybe it’s got one new working part. Just one. Maybe it will need repair later on. Maybe we’ll get another part soon. Maybe we won’t. I don’t need to know right now.

These are the little things, the tiny but fierce victories that I choose to be thankful for.